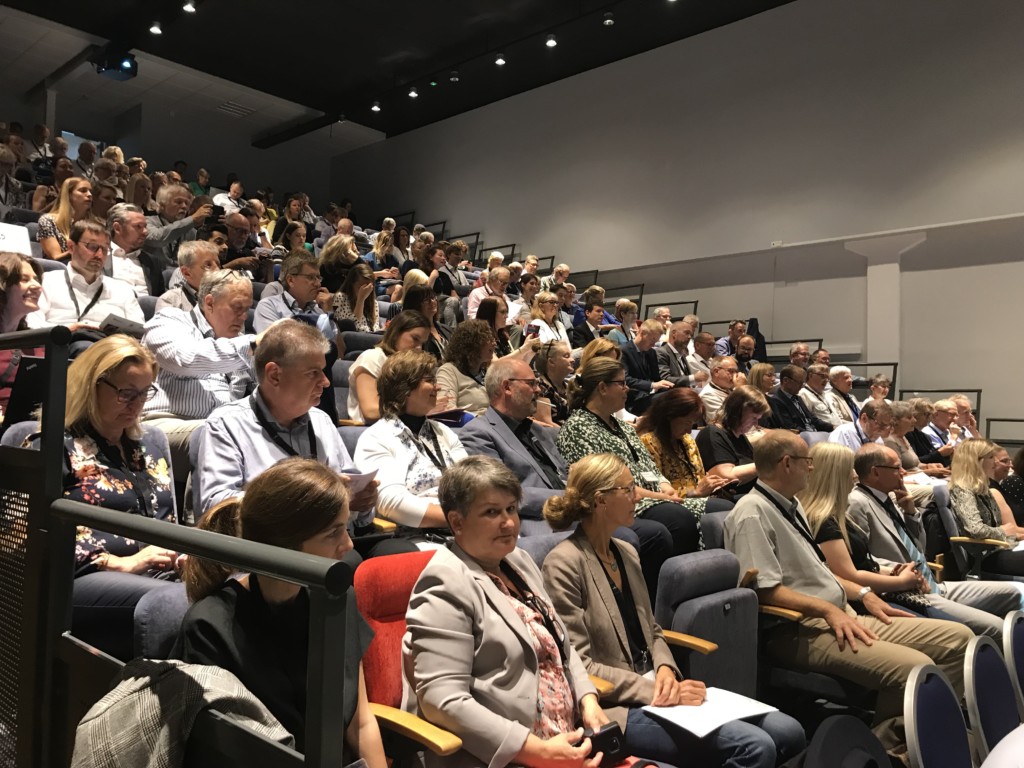 The first impressions from the around 230 participants at this year’s North Sea Conference is overwhelmingly positive. Besides amazing view of the island Marstrand in the Region Västra Götaland, Sweden, the conference showcased how we can tackle climate change by working together in the North Sea Region. To achieve real change we need to involve different stakeholders at different levels – and that is what the North Sea Conference did. Regional public agencies, young citizens and companies shared their thoughts and initiatives to create a climate-smart society. it manifested how local innovations can contribute in creating game changing, green technology, not only for the North Sea – but worldwide.

How to gear up the region for climate change was the first panel debate on the conference day, moderated by Charlotta Lundström, Head of External Relations, Region Västra Götaland and Christian Byrith, Head of the Interreg North Sea Region Programme. 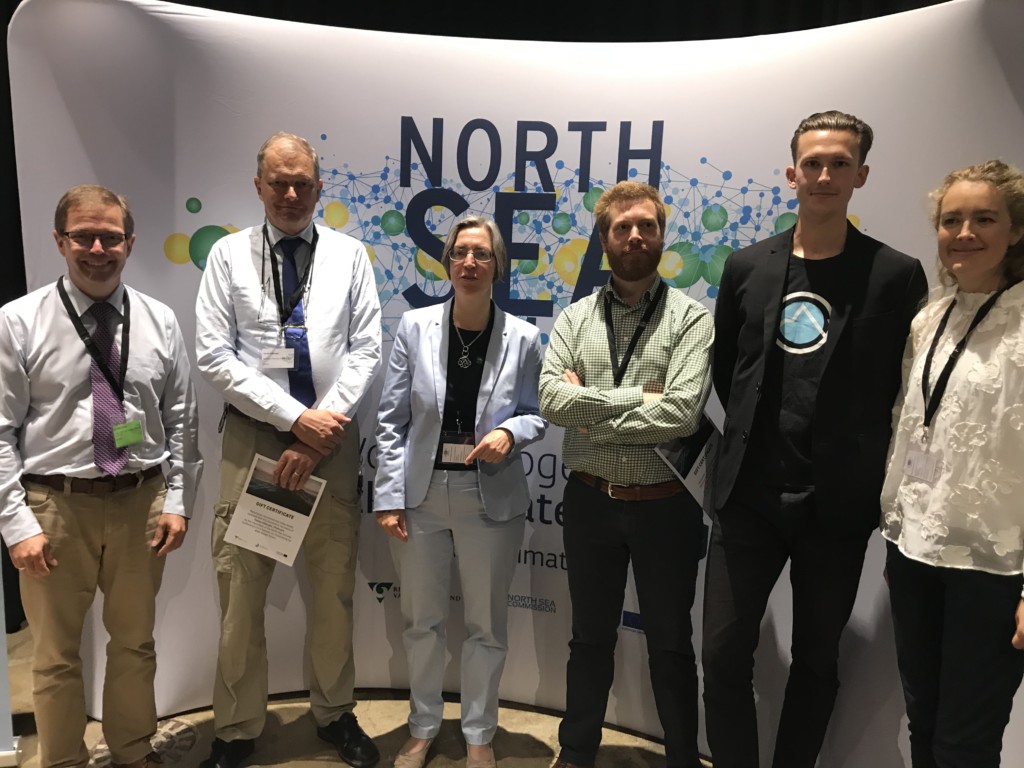 To illustrate what regions can achieve by long-term commitment and action, Helena L Nilsson, Regional Development Director at Region Västra Götaland (SE) presented how the region drives climate action, through the initiative klimat2030. One of the most important parts of the process is the partnership established in the region, involving local, academia, private sector and other actors.

Equally important is the involvement of youth, as an important partner, in the dialogue. To raise that point at the conference, Jamie Wylie, the 2050 Climate Group, was invited providing insights on empowering young people to take the lead on climate change. At the conference, three youth representatives, Isla Young from Aberdeenshire, Merit Katerborg from Groningen and Andrea Alexandra Risholt from Aust-Agder, were invited to the conference, giving their feedback and advice at the end of the conference. Whilst this is a good start, more can be done to achieve real engagement. One of the initiatives mentioned was the decision at the NSC Annual Business Meeting, which they also attended, to recruit a youth advisor (read more about NSC decision on youth participation here).

Partnership is also need to be established beyond the region. Professor Tomas Kåberger, from Chalmers University of Technology, illustrated this by exploring the great potential of renewable energy in the North Sea Region. To fully exploit its potential, Professor Kåberger argued that more cooperation is needed.

The North Sea Commission is an important tool for regions to cooperate and identify common strategic priorities, such in the North Sea Strategy which is currently being renewed (read more about the work here). Adding to this, EU funding play an even more important role to support the cooperation and translate the strategy into action through different projects in the region. This was exemplified by Egon Baldal, Rijkswaterstaat, Ministry of Infrastructure and Water Management in the Netherlands, who shared his experience in regional climate adaptation and from the Interreg North Sea Programme, which is the dedicated EU funding for the region.

As the EU funding period is about to come to its end (the current EU long-term budget runs until 2020), discussions about the future of Interreg programmes starts. Katharina Erdmenger, from the German representation to the EU, gave an update on the negotiations at EU-level for a continuation of the Interreg North Sea Programme. The North Sea Commission is a strong advocate for the Programme and just the day before it called on the EU to maintain the programme with sufficient resources to ensure a continued smooth cooperation between the regions (read the Marstrand declaration adopted at the NSC Annual business meeting here).

The panel followed interactive workshops on climate governance, dealing with topics such as citizen engagement, climate adaptation and decarbonizing transport. Participants took an active part in the discussions leading to recommendations that all stakeholders need to dare to set demands for the future and beyond technical innovation; we mostly need social innovation where citizens, specialists and decision makers become aware that all of them need to play their part in out of the box solutions for the future; and that transnational cooperation is the ideal vehicle for combining top-down and bottom-up approaches in climate governance

To bolster the region to lead the green transition, we do not only need good governance and enabling frameworks, but also building business models for the future. To capture the need of developing new innovations and advancing existing solutions, the second panel focused on climate-smart entrepreneurship.

Anna Flysjö, Senior Manager, Life Cycle Sustainability at Arla Foods Denmark, gave the perspective of a big enterprise in the midst of the transformation with the goal to become net carbon neutral by 2050.

Martin Edlund, CEO Minesto, showcased one of those game-changing technologies discussed at the previous debate, that will enable the renewable energy transition by flying subsea kites generating power from currents, a previously unexplored source of energy. Efva Willen, Business Development Manager at SeaTwirl, explained how their unique design can make floating offshore wind farms possible. Both innovations will contribute to increase unlock the potential of renewable energy sources and lowering its cost so that the change in the energy mix needed to become climate neural can happen.

Sofie Allert, CEO Swedish Algae Factory, gave a new perspective on the use and potential of algae, including for solar energy, and skincare products. A perfect example of how existing products can be used for new applications, and in a circular, green way.

The stories of green innovations and entrepreneurship told at the North Sea Conference both amased and inspired the participants. Who thereafter discussed sustainable energy, climate solutions from blue growth and food production in interactive workshops. What came out of the discussions was that: we have to cooperate to change hardware, software, and mindware in order to achieve sustainable mobility and decarbonise transport; to make use of the large untapped Blue Growth potential we need to overcome the first mover problem by creating a regulatory framework that will incentivize investments; and that we need to promote local, sustainable, healthy and climate-positive food production and consumption both at individual and policy level.

Closing the ceremony, president of the North Sea Commission Kerstin Brunnström emphasised the need for more opportunities to meet, to foster cooperation, discussion and action in the North Sea Region.