Exchange of good examples on inclusion of migrants in the workforce

The North Sea Commission’s Smart Regions Group arranged a workshop on migrants, inclusion and the workforce in Aberdeen 2-3 November. The workshop was led by the Lord Provost of Aberdeen, Barney Crockett, who is also Chair of the Smart Regions Group.

The workshop opened with a reflection on the New Scots partnership in Aberdeen by the Rev. Hugh Wallace, focusing on the humanitarian response to refugees in the city. Then, Dave Black from the Grampian Regional Equalities Council informed about their project to engage with ethnic minorities in the Aberdeen area on employability and employment issues. This was followed up by a presentation by Katie MacLean and Suzy Prosser from Aberdeenshire Council on Aberdeenshire’s approach to employability within the New Scots’ (refugees) resettlement context. There was also a presentation by Zarah Moini from the Norwegian Centre for Multicultural Value Creation on how this centre facilitates innovative start-ups with first generation migrants. 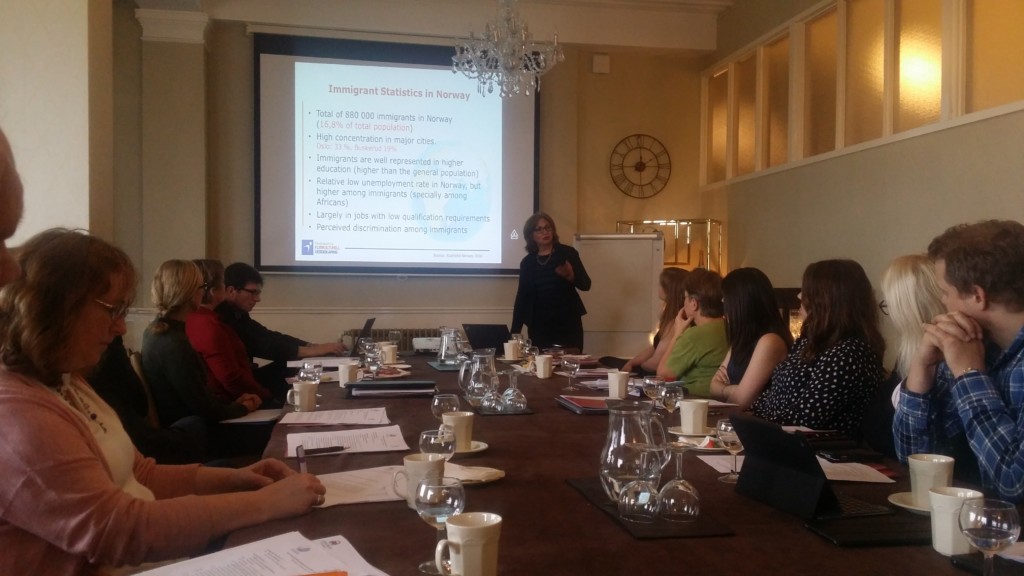 The group also met with the Al-Amal project, in Inverurie, Aberdeenshire, a migrant-initiated project building on the skills, knowledge and expertise of Syrian New Scots, working towards better integration for everyone.

Migrants and the workforce

The workshop continued the following day with Ahmed Salawda, a refugee from Palestine telling his story and how he became involved in helping other refugees through a Red Cross project in the municipality of Tjörn, Västra Götaland, in Sweden. Additional information on this project was given by Barbro Gärdeus from the Red Cross on Tjörn. Thereafter, Eva Bergh from Vest-Agder in Norway talked about how to get migrants into the workforce, focusing on primary and upper-secondary education strategies and practices. Geir Sør-Reime, the advisor of the group, presented five research reports from the Nordic Council of Minister on migrant participation in the workplace.

Karen Greve Somerset from North Denmark region reported from the Nordic Culture Camp, linked to the Culture Summit on Mors. The Culture Camp attracted 20 young artists from 14 different nationalities, who spent a week working together on different projects with the common theme To open up.

In conclusion, the Chair, Barney Crockett, presented some views and facts about the current situation in regard to Brexit.