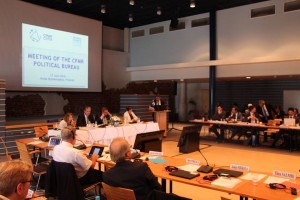 The Conference of Peripheral Maritime Regions (CPMR) has expressed its hope that the people of the UK will vote to remain in the EU in the interests of unity, joint cooperation and global economic prosperity.

Speaking at the CPMR Political Bureau in Kymenlaakso, Finland, on behalf of 160 Member Regions from throughout Europe, CPMR President, Vasco Cordeiro, said: “The CPMR Political Bureau supports the democratic right of the UK people to consider their future in the European Union. We are confident that Europe will be stronger with the UK as a member and that UK will have also a stronger presence and voice within the European Union and not outside.

“If the people of the UK vote to leave, it is a decision that will have a major impact on citizens in the UK, Europe and across the world. This decision would affect the economy, mobility and stability in Europe and beyond.”

Julian German, UK member of the CPMR Political Bureau, said: “The UK members of the CPMR recognise the contribution that the EU has made in their areas, in particular through financial support for investment in infrastructure and skills. Given the positive benefits that EU membership brings to the UK’s CPMR regions, we support the UK remaining in the EU.”

The CPMR Political Bureau wishes to extend their deepest condolences to the family of the UK MP Jo Cox, who was tragically murdered on 16 June.