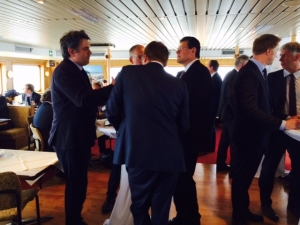 On Friday 29th May, the President of the NSC, Tom-Christer Nilsen, joined a delegation led by the Vice-President of the European Commission for Energy Union, Maros Sefcovic, as part of the visit to the Cross-border Energy Region of Northern Netherlands/Lower Saxony on the Energy Union Tour.

President Nilsen had the opportunity for a one-to-one discussion with Commissioner Sefcovic and raised the question of the North Sea Grid at a table discussion on Offshore Energy. Nieke Homan, Regional Minister of Groningen, Stefan Wenzel, Environment Minister of Lower Saxony, and Michiel Schrier, Regional Minister of Fryslân Province, were also part of this tour aimed at presenting the benefits of the Energy Union and explaining how to benefit from the single market and closer energy integration.

President Nilsen said that the North Sea Commission sees the Dutch Presidency of the European Union in 2016 as “a golden opportunity to emphasise the energy issues in the North Sea Region” and asked it to take a leading role in closer cooperation in order to remove known regulatory and financial barriers to realising a grid for future clean energy supply and demand.