The Conference of Peripheral Maritime Regions (CPMR) welcomes the European Commission’s initiative to produce a White Paper outlining its ongoing reflection on the future of Europe. However, it regrets the lack of a bold and enthusiastic vision for European reform in the paper’s five scenarios, as well as the failure to make any reference to the regional contribution to the debate. 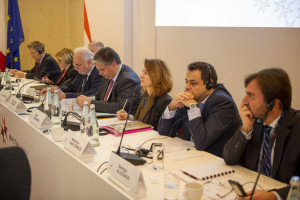 The CPMR will be setting out a strong case for a sixth scenario for reform in its own reflections on the future of Europe over the next 18 months, giving prominence to regional cooperation and to territorial cohesion.

The CPMR is ideally placed to address the future of Europe since many of the challenges we currently face are being shouldered by Europe’s peripheral maritime regions and islands.

Regions play a central role in promoting and engaging in partnerships and in supporting European co-operation in all its different forms: economic, social, cultural and political.

Regions are the bridges that bring Europe closer together, and it is essential that the EU gives high priority in the future to supporting and reinforcing regional co-operation activities, particularly given the instability facing Europe.

Cohesion Policy is one of the few EU policies that empowers action on the ground. The CPMR takes issue with the claim of the White Paper – in Scenario 4 – that regional development policy at EU level has only “limited value”.

CPMR President, Vasco Cordeiro, said: “We are disappointed that the White Paper questions the value of Cohesion Policy. Not only has Cohesion Policy demonstrated that it delivers, it is the only EU policy that connects citizens with the regions, the Member States and the wider EU.”

Alongside territorial cohesion, improving accessibility and investing in blue growth will be key priorities in the CPMR’s reflection, as well as listening to the aspirations of citizens.

CPMR Secretary General, Eleni Marianou, said: “We will be holding a constructive and inclusive debate with all regions and regional associations. We need a robust refocusing of European Policies on reducing disparities and inequalities, while boosting investments across Europe’s regions”